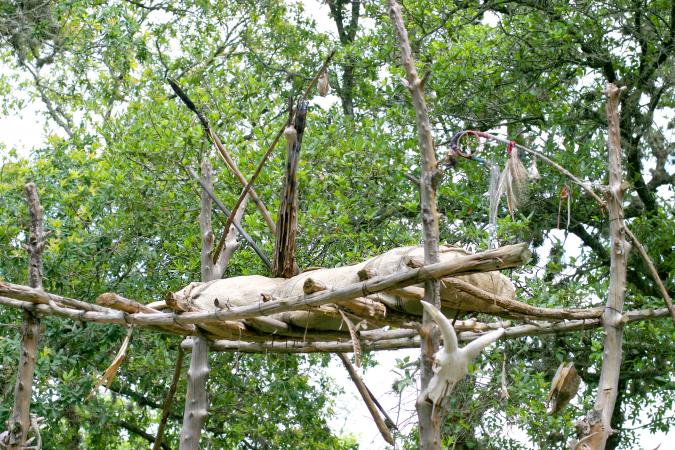 Most Native American tribes believed that the souls of the dead passed into a spirit world and became part of the spiritual forces that influenced every aspect of their lives. Many tribes believed in two souls: one that died when the body died and one that might wander on and eventually die.

Burial customs varied widely from tribe to tribe. Indians disposed of their dead in a variety of ways. Arctic tribes, for example, simply left their dead on the frozen ground for wild animals to devour. The ancient mound-building Hopewell societies of the Upper Midwest, by contrast, placed the dead in lavishly furnished tombs. Southeastern tribes practiced secondary bone burial. They dug up their corpses, cleansed the bones, and then reburied them. The Northeast Iroquois, before they formed the Five Nations Confederation in the seventeenth century, saved skeletons of the deceased for a final mass burial that included furs and ornaments for the dead spirits’ use in the afterlife. Northwest coastal tribes put their dead in mortuary cabins or canoes fastened to poles. Further south, California tribes practiced cremation. In western mountain areas tribes often deposited their dead in caves or fissures in the rocks. Nomadic tribes in the Great Plains region either buried their dead, if the ground was soft, or left them on tree platforms or on scaffolds. Central and South Atlantic tribes embalmed and mummified their dead. But during outbreaks of smallpox or other diseases leading to the sudden deaths of many tribe members, survivors hurriedly cast the corpses into a mass grave or threw them into a river.

Rites among Native Americans tended to focus on aiding the deceased in their afterlife. Some tribes left food and possessions of the dead person in or near the gravesite. Other groups, such as the Nez Perce of the Northwest, sacrificed wives, slaves, and a favorite horse of a dead warrior. Among many tribes, mourners, especially widows, cut their hair. Some Native Americans discarded personal ornaments or blacked their faces to honor the dead. Others gashed their arms and legs to express their grief. California tribes engaged in wailing staged long funeral ceremonies and held an anniversary mourning ritual after one or two years. Southwest Hopi wailed on the day of the death and cried a year later.

Some Southwestern tribes, especially the Apache and Navajo, feared the ghosts of the deceased who were believed to resent the living. The nomadic Apache buried corpses swiftly and burned the deceased’s house and possessions. The mourning family purified itself ritually and moved to a new place to escape their dead family member’s ghost. The Navajo also buried their dead quickly with little ceremony. Navajos exposed to a corpse had to undergo a long and costly ritual purification treatment.

Among the honored officials of the Choctaws were men – and possibly women – who were known as bonepickers. These undertakers were tattooed in a distinctive manner and allowed their fingernails to grow long for their revolting occupation. When the body had remained upon the scaffold the specified time, a bone-picker was summoned, and all the relatives and friends were invited for the last rites.

These mourners surrounded the scaffold, wailing and weeping, while the grisly undertaker ascended the platform, and with his long fingernails thoroughly cleaned the bones of the putrefied flesh.

The bones were then passed down to the waiting relatives, the skull was painted with vermilion, and they were carefully placed in a coffin curiously constructed of such materials as bark and cane. The flesh was left on the platform, which was set on fire; or was carried away and buried.

Johnathan holds a Bachelor’s degree in Psychology and has been researching Native American mortuary customs for three years. He is an old soul and generally prefers the company of animals. His unique visionary approach to the subject allows insightful understanding of history and anthropology.