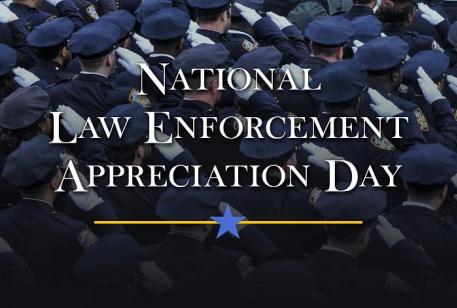 There are over 900,000 law enforcement officers in the United States, and they are honored on National Law Enforcement Appreciation Day (L.E.A.D.), being shown that the community recognizes the difficulty of their job and supports them as they provide a public service. The day is dedicated to all members of law enforcement, but the focus is on police and similar state and local agencies. It was started by Concerns of Police Survivors (C.O.P.S), which partners with organizations across the country to make the day happen.

First observed in 2015, National Law Enforcement Appreciation Day came about in the wake of the 2014 Ferguson, Missouri, officer-involved shooting of Michael Brown, at a time when there was much scrutinization of police officers and concerns about police brutality. Observants of the day spend it thanking police officers, wearing blue, and turning on blue lights at their homes.

Having a police force is a relatively new concept in the scope of history. During colonial times, forces were part-time and privately funded. Volunteer night watches were also common. Boston started one in 1636, followed by New York City in 1658 and Philadelphia in 1700. These were not very efficient, and those who were put on duty were often put there for punishment.

When cities grew larger, night watches were even more ineffective. The first full-time, publicly funded police force in the country was formed in Boston in 1838. Boston was a large shipping area and the need for policing grew out of the need to protect shipping. Merchants had long hired officers to watch over their goods, and then found a way to pass off the costs to the public by convincing them it was for the common good.

In the south, slavery was the original driving force behind the creation of police forces. Beginning in the early eighteenth century, officers chased down runaway slaves and prevented slave revolts. Following Reconstruction, many local sheriffs did similar work to that of the earlier patrols, by enforcing segregation and the disenfranchisement of freed slaves.

By the late 1880s, all major cities had police forces. Officers were there to protect public order, which meant different things to different people. Businessmen with connections to politicians did not want disruptions to their workforce from labor-union organizers and immigrants. Political machines were also rampant at the time, and heads of police were picked by political bosses. It was not until well into the twentieth century that there was a move towards the professionalization of police officers.

National Law Enforcement Appreciation Day, also known as L.E.A.D., is observed next on Wednesday, January 9th, 2019. It has been observed annually on January 9th since 2015.