“Our medicolegal death investigators are 50 percent detectives and the other 50 percent of the job they’re social workers. In one minute they’re investigating a horrific homicide and the next minute they’re notifying the family members of the victim of that homicide. The family may be embracing them and crying on their shoulder. It takes a very unique group of people to be able to flip that switch.” – John Fudenberg – Las Vegas Coroner.

Clark County is also unique in that John Fudenberg is the immediate past President of the International Coroners and Medical Examiners Association, and still sits on that board.  Also the chief Medicolegal investigator for Clark County, David Mills, is the immediate past President of   The American Board of Medicolegal Death Investigators.  (ABMDI).  These prestigious positions placed Clark County Coroners office in a position of authority when it comes to speaking into the medicolegal death investigation field.

Another unique function os the Clark County Coroners office is their volunteer reserve program for investigators.  These men and women join the office and complete a training program to prepare them to work with full time investigators and serve as a ‘farm team’ for filling future  investigator openings .

In this episode I talk with the ‘Las Vegas’ Coroner John Fudenberg and Assistant Coroner Paul Parker about the unique positioning of their office.  We also talk about the  recommendations for the medicolegal field by 2020, as well as where John sees the future of Coroners in America  going.   These and many other topics are discussed. 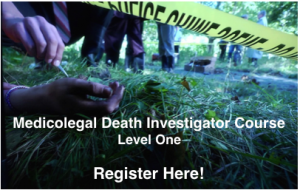