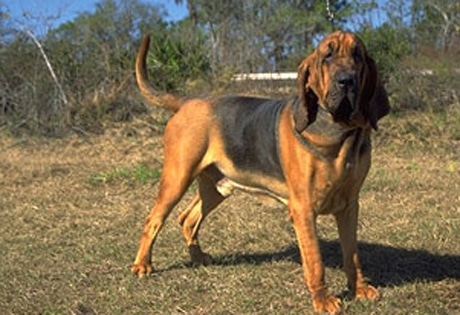 The Bloodhound is usually unfairly ranked as less intelligent than many dogs, but that doesn’t mean the breed isn’t smart. Finding people is where a Bloodhound outshines most dog breeds. They may not be the easiest breed to train, but if you’re lost in the woods this dog can put his nose to the ground and find you with his unfaltering determination. In fact, the Bloodhound’s scenting ability is so legendary that he’s described as “a nose with a dog attached to it.”

All dogs have an incredible sense of smell, but Bloodhounds were born to track. Their long, droopy ears and folds of loose, wrinkly skin around their neck enable these expert trackers to scoop up and trap a specific scent so they can follow it relentlessly, even if the trail has gone cold. Even the slits on the side of the dog’s nose provide extra time for exposure to smells, with a continuous stream of scent-filled air into the nostrils for up to 40 seconds or longer. Plus, each nostril can be moved independently of the other, making it easier to pinpoint where a specific smell is at based on which nostril picked up the scent. This is why a tracking dog will weave back and forth with his nose to the ground when following a trail.

Once a Bloodhound has your scent, it’s almost impossible to throw him off your trail. So, how is a Bloodhound able to find a specific scent and follow it until he locates what he’s tracking? Read on!

Humans have around 40,000 pieces of tiny flakes called rafts that are constantly shed from the skin. These rafts consist of skin cells, hormones, enzymes, fungus, bacteria, parasites and hygiene products. No skin rafts are identical, not even from identical twins, which means we all have our own unique scent that our canine friends can smell. Because some rafts are lighter than air, they are picked up and carried in air currents. Heavier rafts are dispersed around the ground and vegetation as we pass by. We also leave behind scents from our breath and sweat. In a way, we leave a sort of “scent cocktail” of individual smells that rush into the nasal cavity of a dog.

Bloodhounds can pick up a scent both in the air and on the ground. When a Bloodhound picks up and identifies an odor, an image of the scent is sent to his brain. Sniffing clothing or any other article touched by someone creates an image of that specific smell in a Bloodhound’s brain and is implanted in his brain as a scent photograph. To a tracking dog, a scent photo is more vivid to them than a photograph is to us.

Once a Bloodhound has learned a certain scent he never forgets it and can follow it regardless of all of the other smells he may come across while on a trail. Powerful legs and a sturdy body give this exceptional hound the ability to track a scent over even brutal terrains when necessary. This super detective dog has been known to follow his nose for 130 miles or more in pursuit of his quarry, and he can pick up a cold trail that’s almost two weeks old.

History of the Bloodhound Breed

The exact origin of the Bloodhound is unknown. Many experts say this dog was well known in Mediterranean countries well before the Christian period began, but the breed is an ancient dog with documented evidence going back to the third century A.D. The dog we know today was developed in Great Britain. They were originally bred to follow a blood scent from wounded deer, wolves and other large animals. As the deer population began to decrease, hunters turned their attention to fox and the Bloodhound was replaced with the much faster Foxhound. That’s when the Bloodhound’s expertise was repurposed to tracking down poachers, criminals and people who were lost.

Bloodhounds are gentle and friendly dogs. They were never bred to be aggressive, and selective breeding has always been focused on creating a dog to simply find people without harming them. Because the breed can be headstrong at times, you might need some extra CANIDAE treats when training him. However, the Bloodhound’s laidback nature is well suited as a family pet if he has a consistent and confident owner who uses positive reinforcement training. Harsh treatment will backfire with this sensitive dog.

On an interesting side note, Bloodhound does not refer to what a Bloodhound trails – it refers to the lengths early monastery and aristocratic breeders took in recording their ancestry, bloodlines, to keep the status of this “Blooded Hound” pure.

“To the living we owe respect, but to the dead we only owe the truth.”
Voltaire