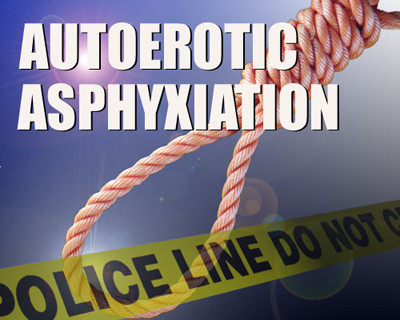 Autoerotic deaths are accidental deaths that occur during solitary sexual activity in which some type of apparatus that was used to enhance the sexual stimulation of the deceased caused the unintentional death.

The prevalence of auto-erotic fatalities is difficult to calculate, since a coroner often records a verdict of accident or misadventure. It is under these labels that many auto-erotic deaths lie hidden. Sometimes, however, where uncertainty exists over whether the person intended suicide, the verdict is left open. Bereaved families usually prefer this. ‘They often find an open verdict a little easier to accept, certainly easier than misadventure which might imply unsuspected goings-on15 scene features can be encountered, in different combinations, at the scenes of autoerotic deaths.  However, it is our duty as investigators to come to ruling in every case we can.  Much is riding on your answer, so a thorough investigation is required.

15 features commonly found at scenes of autoerotic deaths.  Any combination of these may be observed.

Typical victim of an autoerotic  accident is a white male average age 33.

Females are rare,  as are blacks, Asian, and Native Americans .

In hanging deaths semen can be frequently found due to  spontaneous ejaculation  caused by a nerve response. Further, it was commonly observed in the day of public hanging that the condemned would get an erection after dropping from the gallows floor.  This is believed to be a symptom of a severed spinal cord.  (this led people to believe that hanging caused sexual pleasure)

The most common form of dangerous autoerotic activity involves the use of some technique for reducing the oxygen to the brain to achieve an altered state of consciousness.It is important to note the distinction between autoerotic or sexual asphyxia on the one hand, and asphyxia as a cause of death on the other –

Autoerotic asphyxia refers to the use of asphyxia to heighten sexual arousal, more often than not with nonfatal outcome.

Positional such as fall, slips, etc. or if victim becomes unconscious.Sometimes however, someone engaged in autoerotic asphyxia may die a non-asphyxial death – such as heart attack, stroke, or exposure. This will change the manor of death to natural.  NOT autoerotic asphyxia.

Amount of pressure to occlude the neck structures

Listen  to the audio version for a more complete conversation on the topic.