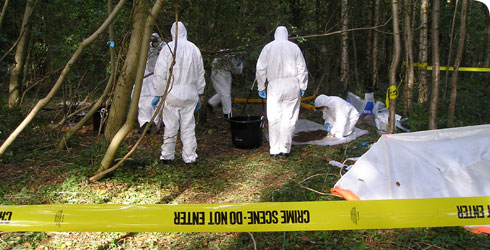 Predicting the postmortem interval of a decedent is a major task of law enforcement. Most methods implemented by death investigators rely on qualitative information (i.e. rigor mortis, livor mortis). Microbes represent 99% of somatic cells in and on a human body.

No data are available on the use of these organisms to predict the time since death of a decedent, though it is known that certain chemicals, many of which are likely a result of microbial communities, are released by decomposing remains in a reliable pattern. Moreover, the effects of microbes on insect colonization of remains, sometimes the best predictor of a postmortem interval, are not understood. Because of a lack of understanding of microbial succession on decomposing human remains, no standard operating procedures (SOP) for sampling and using this information has been developed and validated.